Welcome to the F-words Tools Section! Here you will find various F-words Tools that have been created and provided to us by families, service providers, and researchers to help move the F-words into practice. Please feel free to download, use, and share the tools in your own practice settings.

Please note that we have made these tools freely available. This means you are able to share (i.e., copy and re-distribute the material in any medium or format), and adapt (i.e., modify and build upon the material). However, we ask that, when you are using any materials found on the F-words Knowledge Hub, you properly reference and cite the original materials and do not use the materials for any commercial purposes.

If you are currently using the F-words or have created materials about the F-words we encourage you to connect and share them with us! Many of the tools found on this Knowledge Hub came as a result of sharing materials and ideas. Our hope is that the F-words Knowledge Hub will become a go-to resource for knowledge exchange and sharing, and that by working together we will move the F-words into practice. 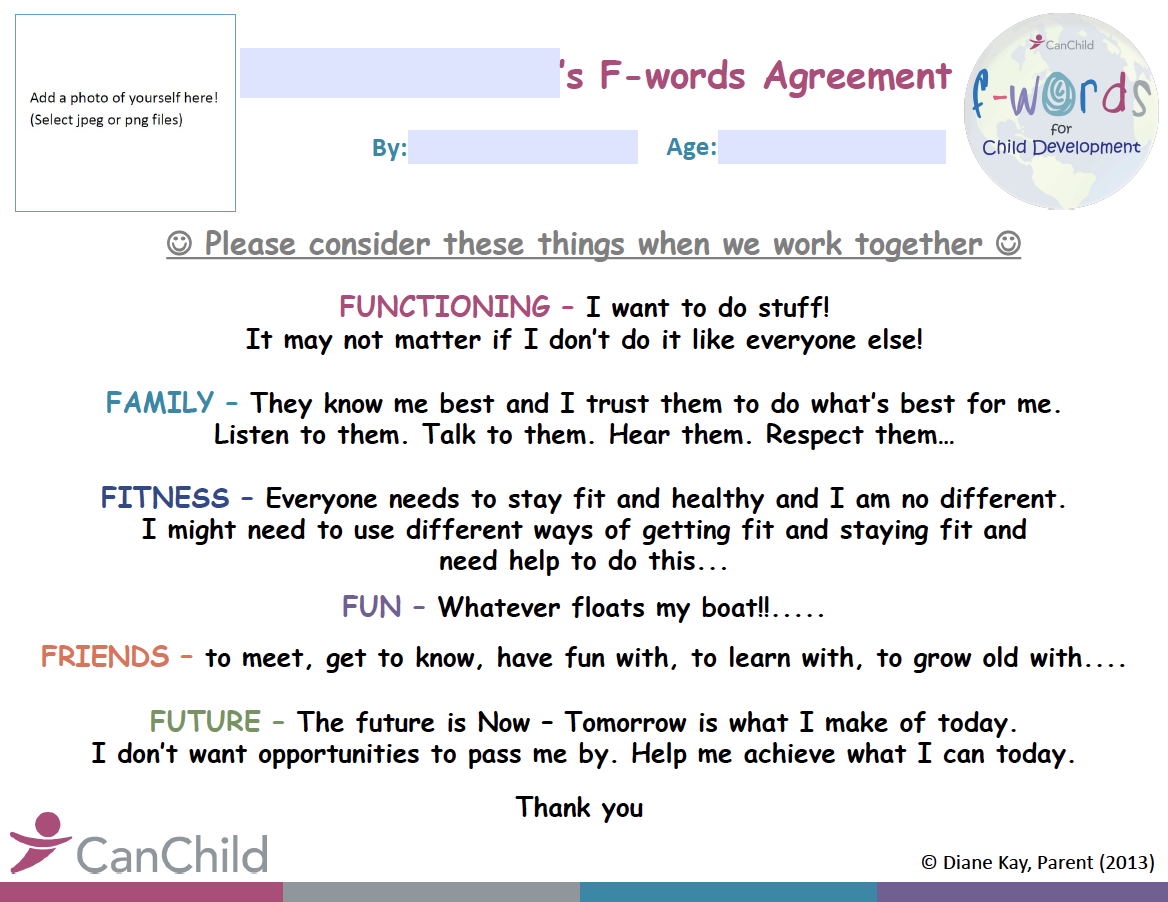 The F-words Agreement was developed by Diane Kay (parent researcher with CanChild’s F-words research group) after she was introduced to the F-words paper in 2012. Diane created the agreement as a tool for her son to share what was important to him with service providers. In an article she wrote for Holland Bloorview’s Bloom Magazine (Titled: Has your doctor heard about these F-words?) Diane stated,  “In thinking about my role negotiating with service providers, I decided to create an “F-words agreement” that we would share with professionals. This laminated print-out would be Alfie's document: he owned it, and he would show it at clinic visits as a starting point for discussion. To me it represents an informal but serious pact between the child and whoever they rely on for support. I see the F-words as a minimum standard, especially when decisions about services and interventions are made. I hope other parents will create an F-words agreement with their child—one that could evolve with a child's development and interests.”  Learn more about Diane here.

F-words Agreement is meant to be used with family members, educators, clinicians, physicians… everyone! ​

Want to create your own F-words Agreement? 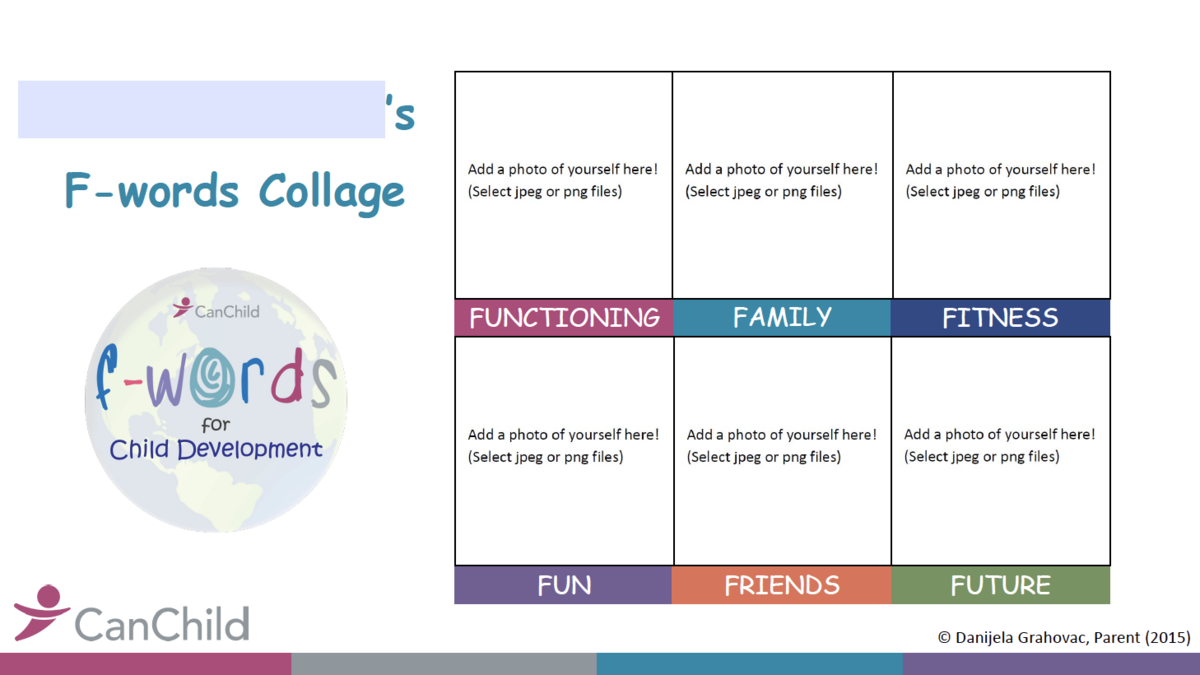 The F-words Collage was developed by Danijela Grahovac (another CanChild-associated parent researcher) as a tool for sharing a visual representation of the F-words. It’s a fun and easy way to think about and talk about the F-words. It is a common saying that a picture is worth 1000 words – so we encourage children, youth, families, service providers, and researchers to make their own F-words collage. Our research team has used the F-words collage in many presentations to introduce the F-words and share what they mean to us (families, clinicians, and researchers). We have also recently started using it as a tool to introduce ourselves when forming new integrated research teams. We encourage you to download and create your own F-words collage. If you share on social media make sure to tag us on Facebook, Twitter, or LinkedIn, so we can see your collage and help spread awareness!

Want to create your own F-words Collage? 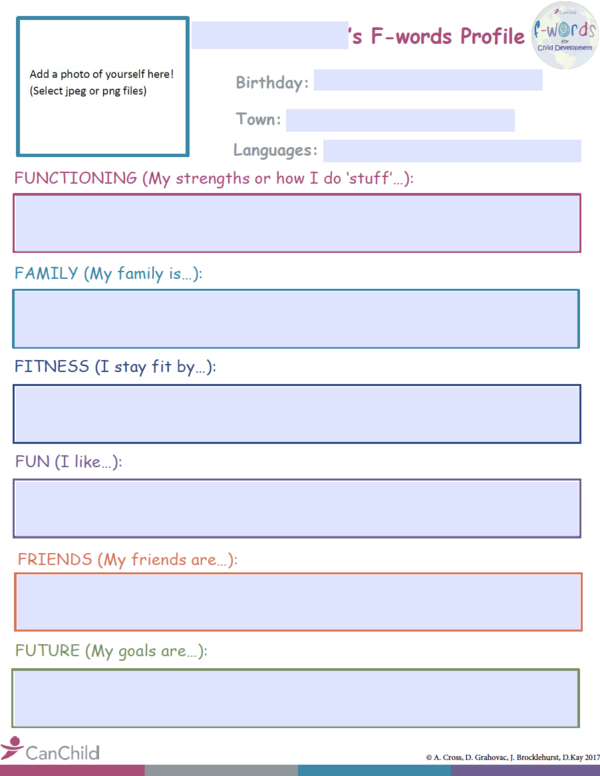 The F-words Profile was created as a one-page document to highlight what each F-word means to the child and family. The idea is that the profile can be used as an introductory document for the initial meetings with new service providers. As the child grows older, the F-words profile may change and thus it can be updated at any time. Julie Brocklehurst (CanChild-associated parent researcher) stated in her most recent F-words blog:“reading my son's file (as large as it is!) does not give a complete picture of him as a whole person.” The idea of the F-words profile is to learn more about the child’s family and friends, what the child likes to do for fitness and fun, and the child and families overall hopes and goals for the future.

Want to create your own F-words Profile? 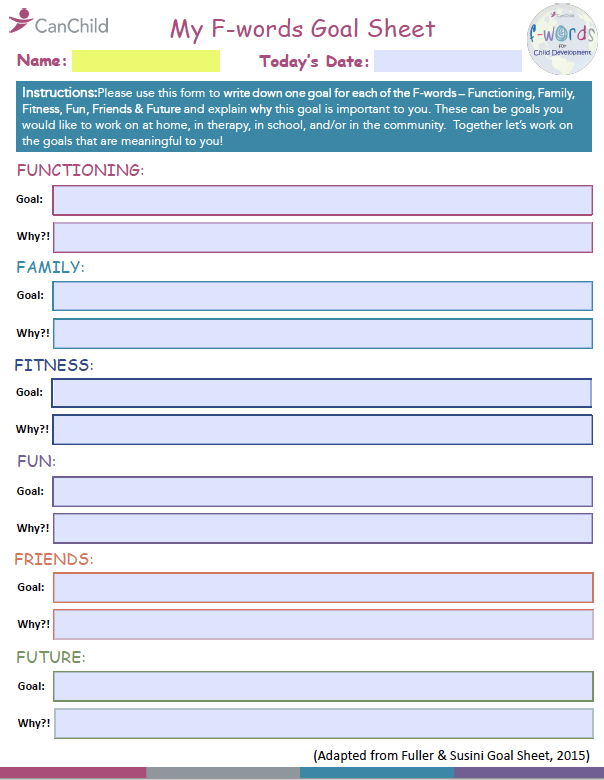 The F-words Goal Sheet was adapted from Fuller & Susini’s (2015) Goal Sheet, initially created to be used by physiotherapists to help families participate in the goal setting process. When describing the rationale for creating the goal sheet our colleague Maria Susini (Physiotherapist) stated:“This was a way for me to use the F-words to see what families/clients really wanted to work on or what was important to them.” Throughout our presentations on the F-words we were hearing from multiple stakeholders that the F-words Framework would be useful for goal setting. Our hope for this F-words Goal Sheet is that it can be used for setting goals in therapy, at school, and at home. There is space to fill in one primary goal for each of the F-words and to answer an important question – why is this an important goal!?

Want to create your own F-words Goal Sheet? 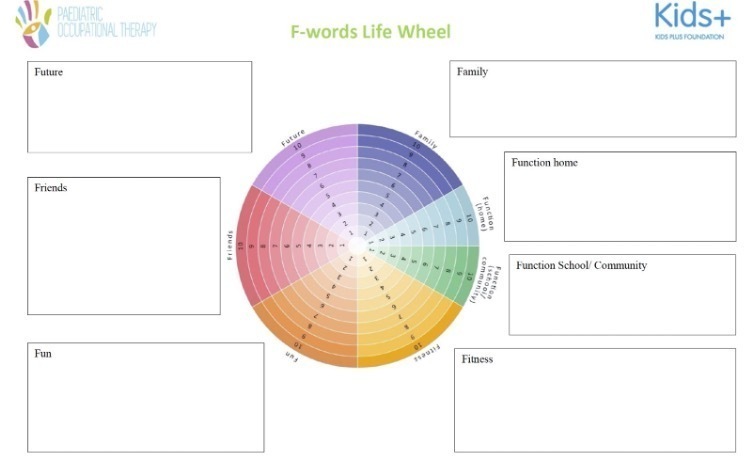 The Life Wheel combines the F-words with Occupational Performance Coaching (Fi Graham) and NZ coaching and Mentoring frameworks (approaches) to connect and understand each of the F-words areas from the voice of the child, family, or youth.

Here you will find F-words tools that were developed for use in schools. These include the Advocacy Guide for School, the Tip Sheet for Educators, and the Newsletter for both parents and educators. Our hope is that these tools will help to move the F-words ideas into the school systems to promote a holistic and strengths-based view of all students. 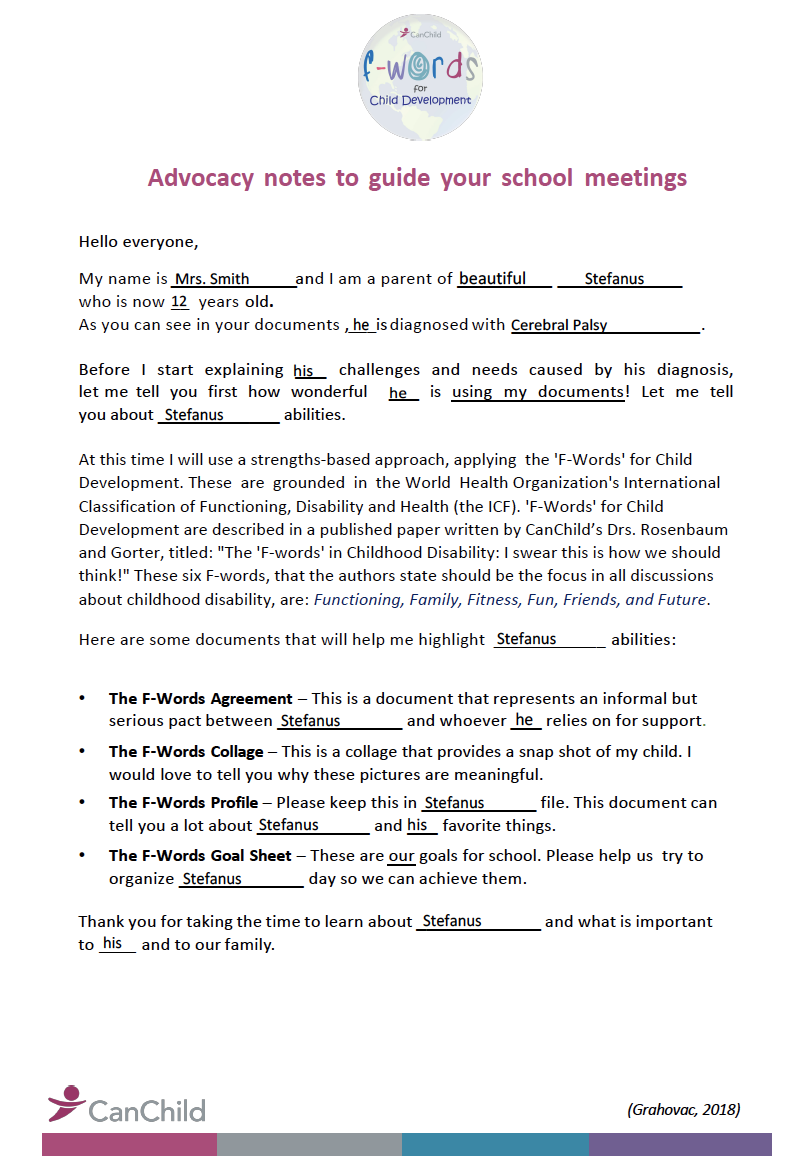 This advocacy guide can be used by parents when their child is starting a new school, or at the beginning of an IEP meeting. Parents can either use the template to enter relevant information about their child, or they can use the ideas in the template to write their own letter.

An instructional Advocacy Guide is provided below, followed by templates that you can customize for you and your child. In this guide, the bolded words indicate where you should put your own information when completing the templates.

The first template, "Advocacy Notes to Guide your School Meetings" is for you to use as a reminder of what to say during the meeting. The second page of this document is for your notes and reminders of the examples that you are going to use in the discussion.

The next template, "Advocacy Letter for School File" is a template for you to fill in, sign and hand in together with F-Words tools for your child's file.

Download Advocacy Guide for Using the F-Words at School here 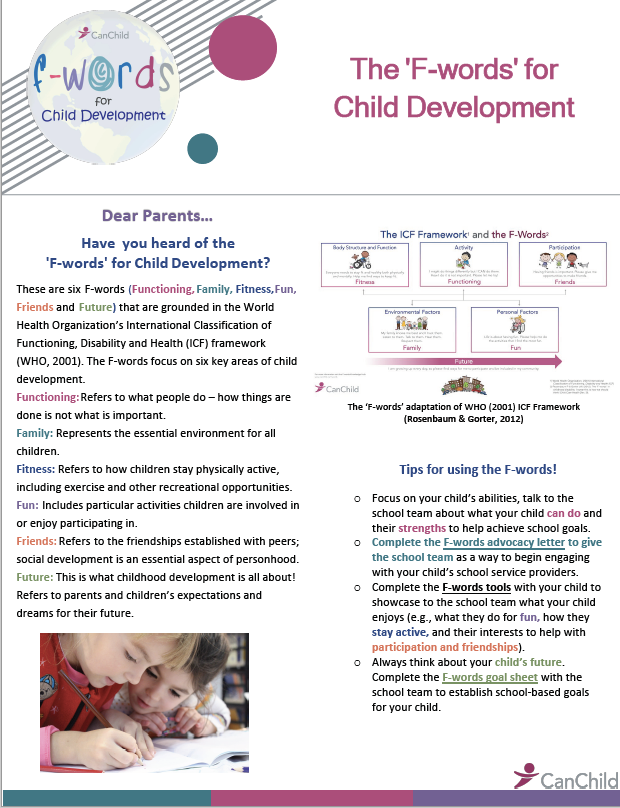 Dear parents, read our Newsletter and find out how to move the F-words into your child's school!

Dear Educators, learn how to move the F-words into your schools by reading our Tip Sheet and Newsletter! 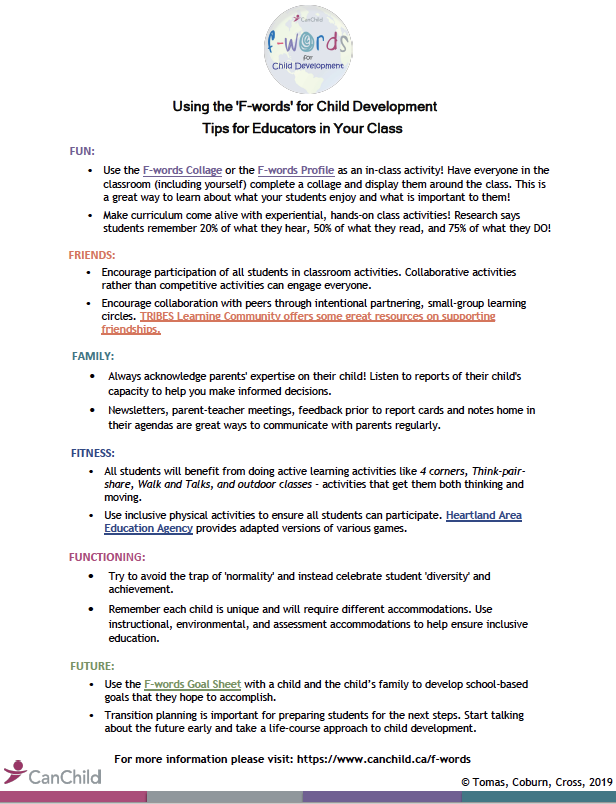 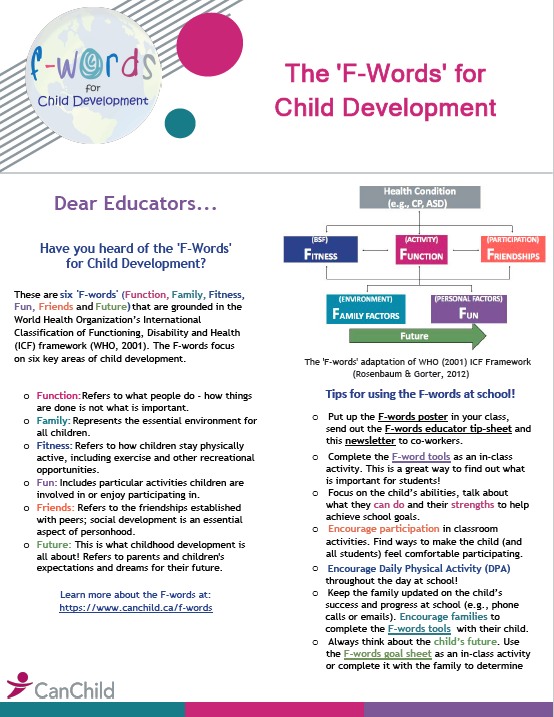 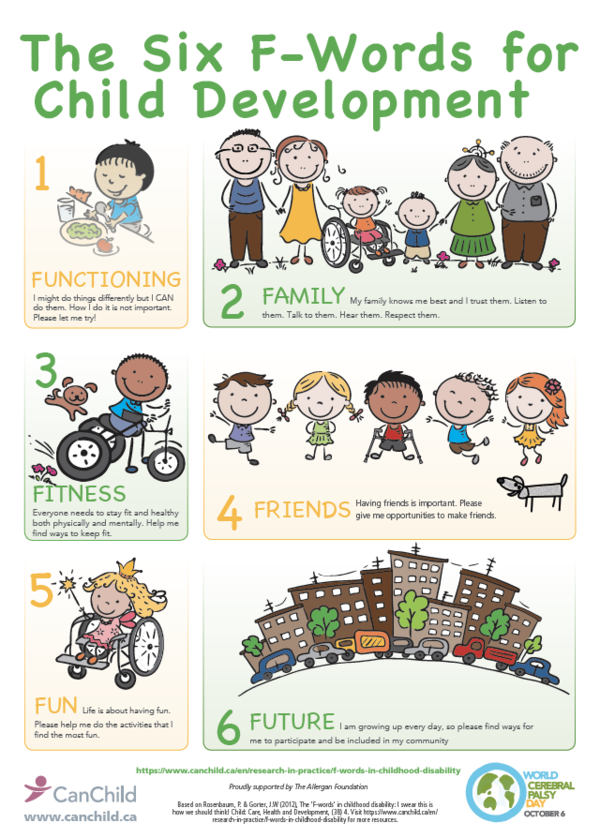 The following poster showcases the six F-words for child development. We encourage you to download this poster and share it with friends, family, and colleagues. The CanChild F-words Research Team revised the title of this poster, which was originally, ‘The F-words in Childhood Disability’, to the ‘F-words for Child Development’, to highlight that these F-words can be applied to ALL children, and not just those who have disabilities. If you are an educator, we encourage you to hang this poster in your class to introduce your students to the F-words ideas and provide a more holistic approach to child development in the classroom.