Researchers and families are partnering together to spread awareness and increase the uptake of the F-words around the world. Here are a list of publications, presentations, posters, news articles, blogs, and videos that have featured the F-words ideas. The F-words Footprint highlights how the F-words are being shared by people around the world and we hope it will continue to grow.

If you have written a blog or article on the F-words or included the F-words ideas in your presentations or publications, please share with us how you are using the F-words concepts. Please contact Andrea Cross (crossac@mcmaster.ca). 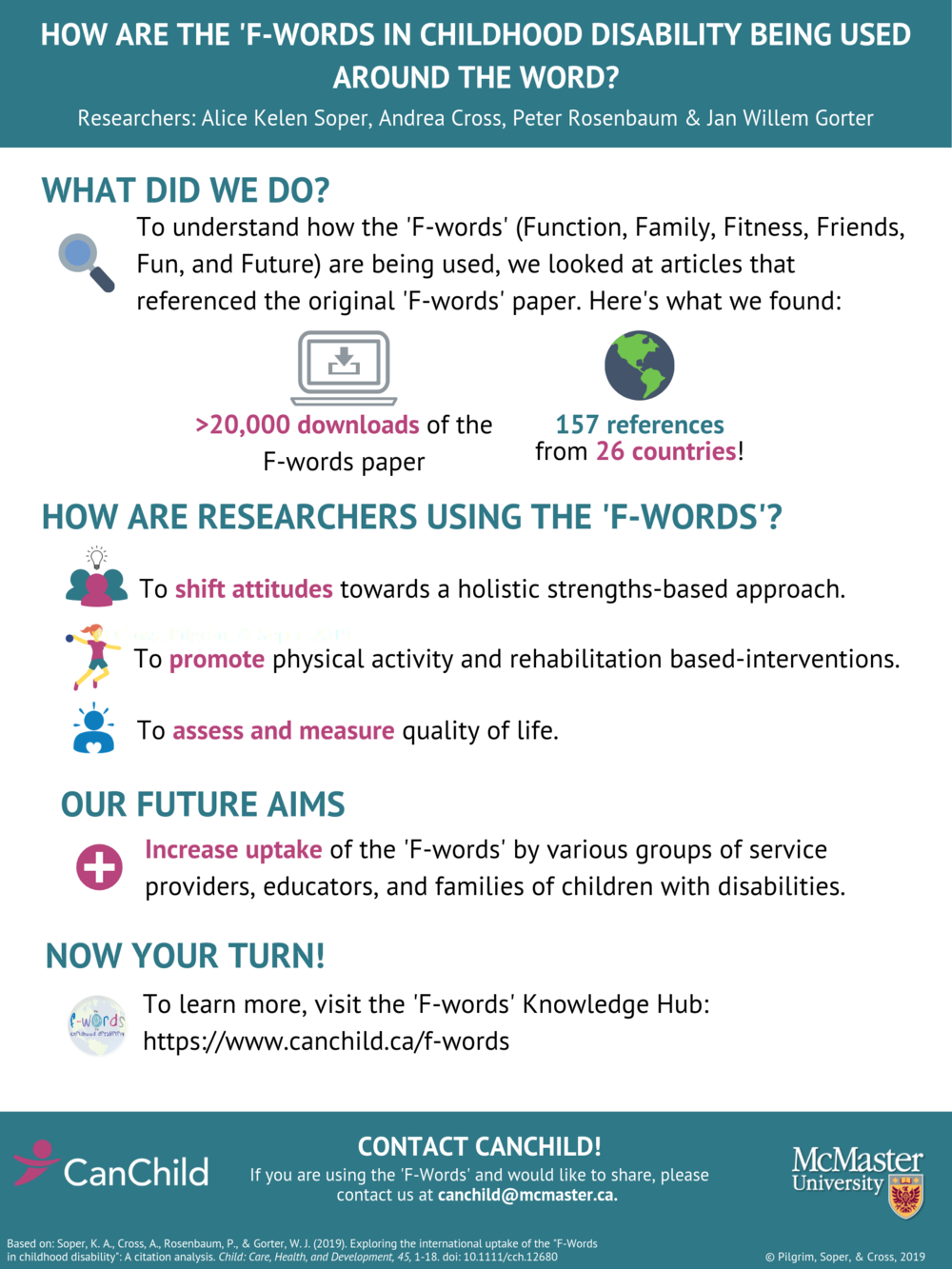 Focusing on Fitness: Participation in Parasports

This was a webinar presented by Christina Swett and Julia Hanes to discuss the role of parasports in the lives of children and adults with disabilities, and to show people how to get involved.

The F-Words- A Framework for Supporting Family Wellbeing

This was a panel presentation (Panelists: Julia Hanes, Danijela Grahovac, Jonathan Lu, Maria Susini) at CP-NET Science and Family Day about what the F-words means to parents, youth, and clinicians and their hopes for the future of the F-words.

This video offers a quick overview of the six F-words developed by Dr. Rosenbaum and Dr. Gorter.

A three-minute awareness video co-created by families and researchers to spread awareness on the F-words in Childhood Disability.

An introduction to the six F-words in Childhood Disability

Dr. Rosenbaum presents on the F-Words in Childhood Disability

This is a video of Dr. Rosenbaum's first presentation on the F-words as a Keynote Address at the16th Conference & Annual Meeting of the North of England Collaborative Cerebral Palsy Survey in Durham,UK in 2011.

Parental perspectives on the F-words

Diane Kay (a parent researcher on the F-words in Childhood Disability Research Team) presents a parental perspective on the F-words at CanChild Research Issue (April 2013). 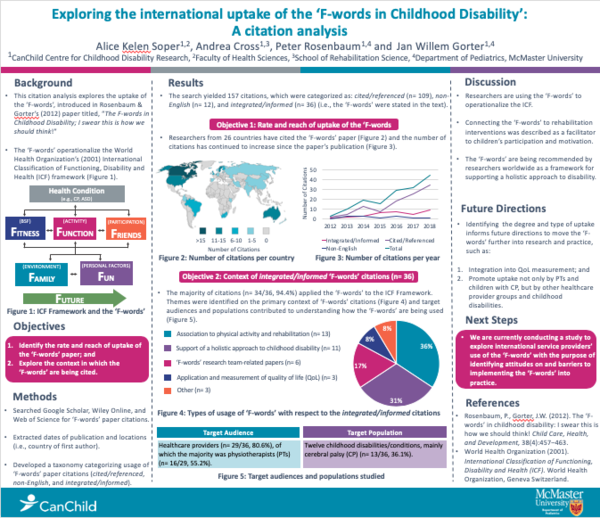 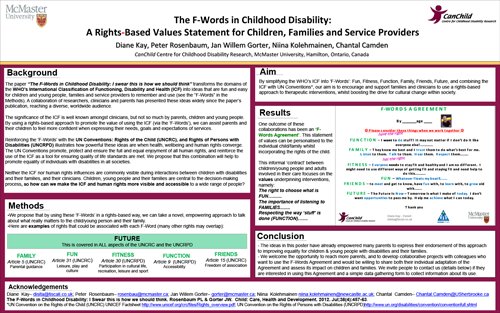 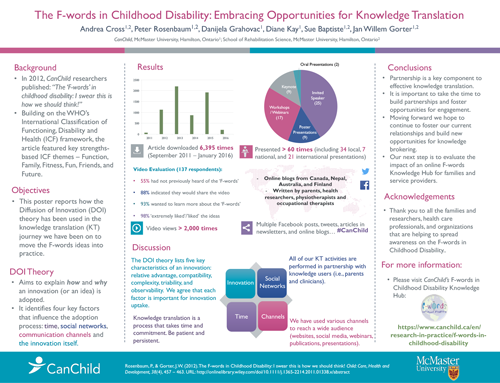 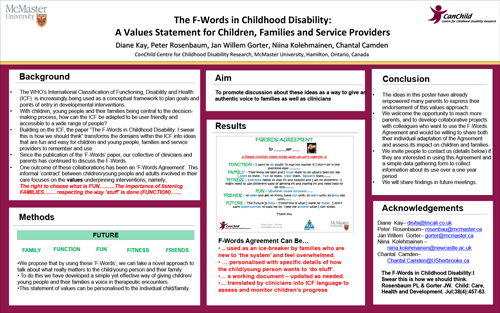 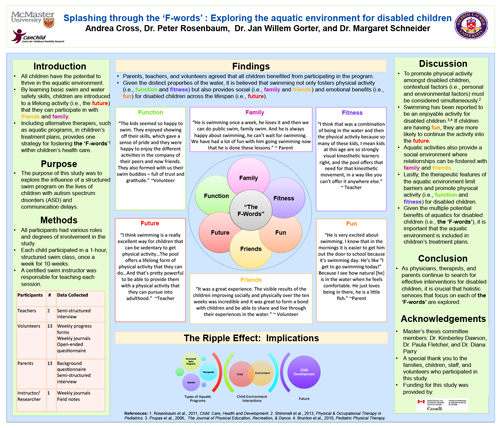 A Family-Researcher Partnership: Working together to spread awareness on the 'F-words' in Childhood Disability
Cross, Rosenbaum, Grahovac, Kay & Gorter 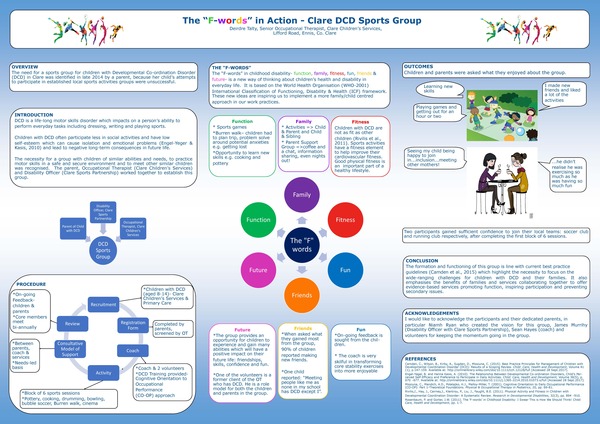 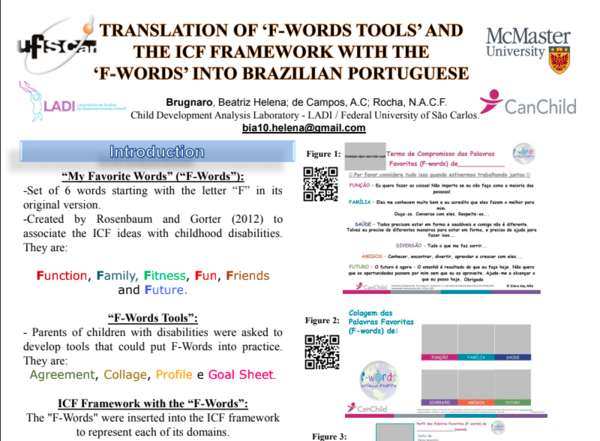 What are other people saying about the F-words?

The Sunday Times highlights the F-words in an article by Kumudini Hettiarachchi, titled “Changing lives with the all-important F-words” (January 29 2017)

Dr. Fiona Jones (Occupational Therapist), Australia wrote an article on the F-words, titled "The six 'F's' of therapy planning for your child" on the Source Kids website (August 15 2016)

Diane Kay (F-words Parent Researcher) writes about the F-words in the Holland Bloorview Bloom Magazine, titled "Has your doctor heard about these F-words?" (March 4 2013)

Globe and Mail article written by Tralee Pearce titled "Mastering motor skills with a little mischief." Includes an interview with Dr. Peter Rosenbaum and an introduction to the F-words (0ctober 25 2012)

Ellie Barton (Physiotherapist), UK wrote a blog post on Children’s Physio Blogger titled “F-Words Paper – The ‘F-words’ in childhood disability: I swear this is how we should think” (April 4 2017)

Jennifer Johannesen (Author & Healthcare Advisor), Ontario, Canada wrote a blog post on her blog, which highlighted the F-words, titled “What could be better than patient-centred care? Here are a few examples” (October 24 2016)

Julie Brocklehurst (Parent-Researcher), Newfoundland, Canada blogs on the F-words on her Tiptoeing Through webpage

External Videos on the F-words

Vicki Cavalieros discusses the F Words and how clinicians should work with individuals with cerebral palsy and their families.

Help us promote the six f-words!

"The Six 'F-words' for childhood disability" poster, created in partnership with the World CP Day organization.

CanChild has partnered with Child Development Resource Connection Peel to create a series of six webinars on each of the 'F-words'.

Highlighting how the 'F-Words' are being used around the world!